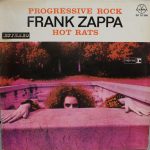 Hot Rats is the second solo album by Frank Zappa, released in October 1969. It was Zappa’s first recording project after the dissolution of the Mothers of Invention.

It features the work of several artists in addition to Zappa, including one former member of the Mothers of Invention, Captain Beefheart, and Don “Sugarcane” Harris. Five of the six songs are instrumental; the other, “Willie the Pimp”, features vocals by Beefheart. In his original sleeve notes, Zappa described the album as “a movie for your ears”.

6 It Must Be A Camel