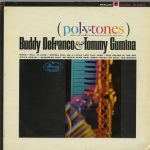 Pol.Y.Tones is an album by Buddy DeFranco & Tommy Gumina Quartet, released in 1963.

Boniface Ferdinand Leonard “Buddy” DeFranco (February 17, 1923 – December 24, 2014) was an Italian American jazz clarinet player. One of few clarinetists playing bebop, DeFranco was described by critic Scott Yanow as the leading American jazz musician on his instrument from the 1940s until Eddie Daniels came to prominence in the 1980s. In addition to his own work as a bandleader, DeFranco led the Glenn Miller Orchestra for almost a decade in the 1960s and ’70s.