1992 Southern Sons – Nothing But The Truth 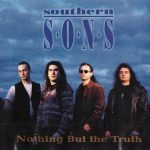