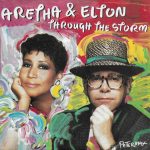 “Through The Storm” is a single by Aretha Franklin and Elton John from Aretha’s album Through The Storm, released in 1989. It peaked #16 in the US Billboard Charts and #41 in the UK Charts.

Through the Storm is the thirty-fifth studio album by American singer Aretha Franklin, released on Arista Records in the spring of 1989. Despite the number 16 Billboard Hot 100 hit title track (a duet with Elton John), the album was not a commercial success; it reached number 55 on the Billboard 200. Selling approximately 225,000 […]