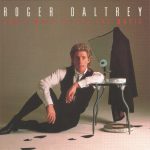 Can’t Wait To See The Movie is the seventh solo studio album by English singer, songwriter and actor Roger Daltrey, the lead vocalist for The Who. The album was released in mid 1987 on the record label Atlantic, and was primarily produced by Alan Shacklock, in association with David Foster, Chas Sanford and Jimmy Scott. Among the songs Daltrey is credited as co-writer on two tracks “Balance on Wires” and “Take Me Home”. David Foster co-wrote the track “The Price of Love”, which was also featured in the 1987 movie The Secret of My Success starring Michael J. Fox.

Can’t Wait to See the Movie is a pop album that incorporates some genres such as funk, rock, and jazz, and it makes prominent use of the synthesizer. The album was received negatively by the majority of music critics, with some critics describing its music as inauthentic and bemoaning the production as too polished. It was also a commercial disappointment, missing the album charts in Europe and the US. One critic referred to it as “Can’t Wait to Sell the Record,” while other reviewers noted good points to the recordings. When asked about the album at the time, Daltrey said that “It’s amazing after all these years how everything can become new and fun again.”

6 The Price Of Love

7 The Heart Has Its Reasons