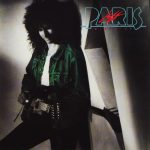 Wired Up is the second album by Jeff Paris, released in 1987.

Still performing under the name Geoffrey Leib, Paris began his career as a session musician in the 1970s, appearing on albums by such acts as Jay Gruska (Gruska on Gruska) and Bill Withers (Naked & Warm, ‘Bout Love). His initial band was the jazz/soul/disco quartet, Pieces, who released an album in 1979, following which he had a stint with the disco band L.A.X., who released two albums in 1979 and 1980.