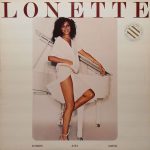 Words And Music is the second solo album by Lonette McKee, released in 1978 on Warner Bros.

Lonette Rita McKee (born July 22, 1954) is an American film, television and theater actress, music composer, producer, songwriter, screenwriter and director. McKee is best known for her role as Sister Williams in the original 1976 musical-drama film Sparkle. McKee also had notable roles in such movies as The Cotton Club, Jungle Fever, ATL, and Honey.

2 Maybe There Are Reasons

7 At Least I Had You One Time

8 Come To Me Softly

9 I Wanna Be With You