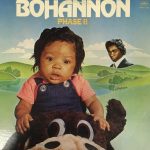 Phase II is the seventh album by Hamilton Bohannon, released 1977 on Mercury Records.

Hamilton Frederick Bohannon (born March 7, 1942), often credited and known professionally simply as Bohannon, is an American percussionist, band leader, songwriter and record producer, who was one of the leading figures in 1970s disco music.

2 But What Is A Dream

5 Isn’t It A Beautiful Morning

Ben Picone And The Atlanta Strings