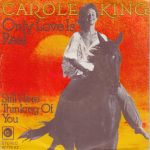 “Only Love Is Real” is a song written and performed by Carole King. The song was included on her 1976 album, Thoroughbred. The single peaked at number twenty-eight on the Billboard Hot 100 and was King’s fourth and final number one on the Easy Listening chart, where it remained for one week in March 1976. It is ranked as the 40th biggest AC/Easy Listening hit of 1976.

Thoroughbred is an album by American singer-songwriter Carole King, released in 1976. This is her final effort issued by Ode Records, and also the last album produced by Lou Adler who had been her collaborator since Tapestry. The track “Only Love Is Real” was released as a lead single from the album, and became her […]