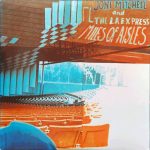 Miles Of Aisles is the first live album by Canadian singer-songwriter Joni Mitchell, released in 1974 on Asylum Records. It is a double album documenting her concerts in support of the Court and Spark album with her backing band for the tour, the L.A. Express. It reached #2 on the Billboard 200 and became one of her biggest-selling records, certified a gold record by the RIAA.

This was Mitchell’s first tour with backing musicians; prior to this she had generally performed solo, and had never organized a tour with a band. She hired an already existing group, the jazz fusion band L.A. Express, members of which had appeared on her previous studio album, Court and Spark, the biggest commercial success of her career. A track from this live album, “Big Yellow Taxi”, was released as a single. Four years after the studio version had stalled at #67 on the Billboard Hot 100 as a single, this live version reached #24 on the Billboard Hot 100 charts, becoming Mitchell’s fourth Top 40 hit single and third in a row.

The album contains many of her best-known songs up to that time, but only one track derived from her recent album and neither of its two hit singles, “Help Me” and “Free Man in Paris”. It also includes two brand new songs “Love Or Money” and “Jericho” – the latter of which she would record a studio version of for her 1977 album Don Juan’s Reckless Daughter. All tracks except two were recorded at the Universal Amphitheatre in Los Angeles, August 14 to 17, 1974. “Cactus Tree” was recorded at the Los Angeles Music Center on March 4, and “Real Good for Free” at the Berkeley Community Theater on March 2. The cover photo was taken at the Pine Knob Music Theater in Clarkston, Michigan.