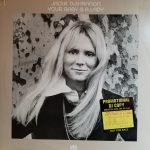 Your Baby Is a Lady is an album by Jackie DeShannon, released by Atlantic Records in 1974.

Jackie DeShannon (born Sharon Lee Myers, August 21, 1941) is an American singer-songwriter with a string of hit song credits from the 1960s onwards, as both singer and composer. She was one of the first female singer-songwriters of the rock ‘n’ roll period. She is best known as the singer of “What the World Needs Now Is Love” and “Put a Little Love in Your Heart” and, as the composer of “When You Walk in the Room” and “Bette Davis Eyes,” which were hits for The Searchers and Kim Carnes, respectively. Since 2009, DeShannon has been an entertainment broadcast correspondent reporting Beatles band members’ news for the radio program Breakfast with the Beatles

6 You Touch And You Go

7 The Other Side Of Me