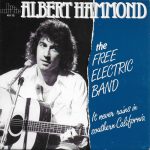 The lyrics tell the story of a postwar middle-class American youth who rebels against the values of his parents by pursuing a musical career rather than the professional life that had been expected of him.

The Free Electric Band is an album by Albert Hammond released by Mums Records. The album landed on the Billboard 200 chart, reaching #193. The title track single hit #48 on the Billboard Hot 100 and #19 on the UK Singles Chart in 1973. The single “The Peacemaker” hit #51 on the Adult Contemporary chart […]