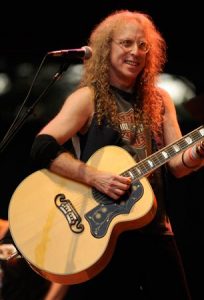 Robert “Waddy” Wachtel (born May 24, 1947) is an American musician, composer and record producer, most notable for his guitar work. Wachtel has worked as session musician for other artists such as Linda Ronstadt, Stevie Nicks, Keith Richards (guitarist of Keith’s side-band The X-pensive Winos), The Rolling Stones (lead guitar on Saint Of Me), Jon Bon Jovi, James Taylor, Iggy Pop, Warren Zevon, Bryan Ferry, Michael Sweet, Jackson Browne, and Andrew Gold, both in the studio and live.

Wachtel was born May 24, 1947, in Jackson Heights in the New York City borough of Queens. Waddy is Jewish. At about age 9–10,Wachtel began to learn to play the guitar, taking lessons with teacher Gene Dell (who insisted that he learn to play right-handed despite being naturally left-handed) until about age 14. At that age, he says, he began writing songs.

Wachtel also studied with Rudolph Schramm, who was the head of the NBC staff orchestra and went on to teach music at Carnegie Hall. Schramm tried to get Wachtel to take piano lessons, but Wachtel was intent on playing guitar so Schramm agreed to give him guitar lessons three times a week on rhythm, melody and harmony.

After performing with local bands in the New York area, Wachtel formed his own band, The Orphans, who played in Connecticut and New Hampshire. Eventually the band settled into a regular bar band routine, playing in Newport, Rhode Island, where Wachtel took lessons from Sal Salvador. When the Orphans disbanded, he formed another band, Twice Nicely. At the suggestion of Bud Cowsill (of The Cowsills), he brought Twice Nicely to Los Angeles in 1968 where they recorded a few demos, but after two years, Wachtel decided to work as a session player, recording with The Cowsills and produce their albums.