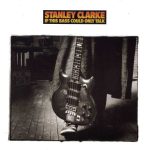 If This Bass Could Only Talk is a 1988 album by American bass player Stanley Clarke.

Stanley Clarke (born June 30, 1951) is an American bassist, film composer and founding member of Return to Forever, one of the first jazz fusion bands. Clarke gave the bass guitar a prominence it lacked in jazz-related music. He is the first jazz-fusion bassist to headline tours, sell out shows worldwide and have recordings reach gold status. Clarke is a 4-time Grammy winner, and one of his electric basses is permanently on display at The Smithsonian National Museum of African American History and Culture in Washington, D.C.

1 If This Bass Could Only Talk

5 Funny How Time Flies (When You’re Having Fun)