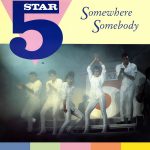 “Somewhere Somebody” is the name of a 1987 hit single by British pop group Five Star. It was the third release from their third album, Between the Lines.

No promotional video was made to accompany this single as the band were too busy with the “Children of the Night Tour”. The live performance of the song became its ‘official’ video.

The song’s chart position of #23 became the group’s lowest charting UK Top 40 single since “Love Take Over” in 1985.