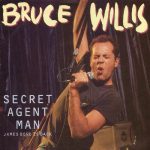 “Secret Agent Man” is a song written by P. F. Sloan and Steve Barri. The most famous recording of the song was made by Johnny Rivers for the opening titles of the American broadcast of the British spy series Danger Man, which aired in the U.S. as Secret Agent from 1964 to 1966. The song itself peaked at No. 3 on the Billboard Hot 100.

It  was also recorded by Bruce Willis on his album The Return of Bruno (1987). The song opened with the sounds of a car door being opened and closed, footsteps, and a single gunshot.

The Return Of Bruno is the debut album by actor Bruce Willis. Released by Motown in 1987, this album is an eclectic gathering of R&B music sung by Willis, with backing musicians including Booker T. Jones, The Pointer Sisters, and The Temptations. It is a companion piece to an HBO special of the same name, […]