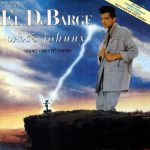 “Who’s Johnny” is the debut solo single by El DeBarge. Released in 1986 on the Gordy label, the single was used for the film Short Circuit and reached number three on the Billboard Hot 100 and number one on the Hot R&B Singles chart. It was the only solo number 1 single El DeBarge released after he left his surname-based family group, DeBarge that same year.

El DeBarge is the self-titled debut album by El DeBarge. It was released in 1986 on Gordy Records (a sub-label of Motown and featured the hit singles, “Who’s Johnny” and “Love Always”. Singer/actress Vanity featured on backing vocals on the track, “Secrets Of The Night”. This album went gold. Eldra Patrick “El” DeBarge (born June […]