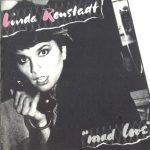 Mad Love is the tenth studio album by singer, songwriter and producer Linda Ronstadt, released in 1980. It debuted at #5 on the Billboard album chart, a record at the time and a first for any female artist, and quickly became her seventh consecutive album to sell over one million copies. It was certified Platinum and nominated for a Grammy.

The album contains versions of Elvis Costello’s “Party Girl”, “Girls Talk” and “Talking in the Dark” as well as Neil Young’s “Look Out for My Love”. Three songs from The Cretones’ first album, Thin Red Line, were also featured.

The album had Top 10 hits in the United States with the frenetic “How Do I Make You” and the achingly pleading “Hurt So Bad”. “I Can’t Let Go” was the album’s third hit single. Ronstadt was named Billboard’s #1 Female Artist of 1980. This was her fourth time earning that honor. (She was also named the year’s top woman in 1975, 1977, and 1978.) Linda was nominated for a Grammy Award in the Best Rock Vocal Performance Female category for the single “How Do I Make You”. In the United Kingdom, this release peaked at #65.

In 2011, after 31 years, Mad Love was taken out of print. The album was put into reprint in 2012 as part of Warner/Rhino’s “Original Album Series” a group of five classic albums packaged in a box with each individual CD in a mini-replica of the original vinyl packaging. That package has also been deleted. In 2018, Friday Music released a limited edition on pink vinyl.

6 Look Out for My Love

10 Talking In The Dark