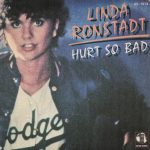 “Hurt So Bad” is a song written by Teddy Randazzo, Bobby Weinstein, and Bobby Hart. It is a classic 1965 Top 10 hit ballad originally recorded by Little Anthony & The Imperials. Linda Ronstadt also had a Top 10 hit with her cover version in 1980. The song has been re-recorded by numerous artists including The Lettermen, who took the song to number twelve in September 1969.

Linda Ronstadt recorded a cover of “Hurt So Bad” for her Platinum-certified album, Mad Love, in 1980. Produced by Peter Asher on Asylum Records, it was released as the disc’s second single. Linda’s version of the song featured a guitar solo by Danny Kortchmar. It stands as the most successful version ever recorded of the song, which peaked at #8 on the Billboard Hot 100 and #9 on the Cash Box Top 100 chart in the spring of 1980.