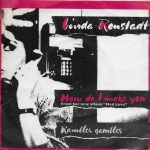 “How Do I Make You” is a song composed by Billy Steinberg and recorded by Linda Ronstadt in 1980, reaching the top 10 in the United States.

Steinberg stated that he was “a little bit influenced” by the Knack hit “My Sharona” in writing “How Do I Make You”. He originally recorded the song with his band Billy Thermal as one of several demos produced while the band was signed to Planet Records. The label ultimately did not release these songs. However, several Billy Thermal demos, including “How Do I Make You”, were eventually included on a Billy Thermal EP released by Kinetic Records, a Los Angeles-based independent label.

According to Steinberg, the song’s later rise to fame was born from a relationship between Billy Thermal’s guitarist, Craig Hull, and Wendy Waldman, a backing vocalist for Linda Ronstadt’s live shows: “without asking my permission or anything, Wendy and Craig played the Billy Thermal demos for Linda Ronstadt, and Linda liked the song ‘How Do I Make You.'”