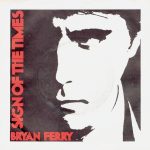 “Sign of the Times” is a song by Bryan Ferry, the former lead vocalist for Roxy Music. It was released as the second single from his fifth solo album “The Bride Stripped Bare” in 1978, being Ferry’s thirteenth single. The single peaked at number 37 in the UK singles chart, but failed to chart elsewhere. The single also features the non-album track, “Four Letter Love” as the B-side. The promotional music video performance, was shot on the first episode of The Kenny Everett Video Show in 1978.

The Bride Stripped Bare is a 1978 solo album by Bryan Ferry and is his fifth album released independent of Roxy Music. It was recorded after his girlfriend Jerry Hall left him for Mick Jagger in 1977, and appears to contain references to their break-up. The album peaked at number 13 on the albums chart […]