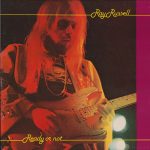 Ready Or Not is the fifth solo album by guitarist Ray Russell, released in 1977 on DJM.

Raymond ‘Ray’ Russell (born 4 April 1947) is an English session musician who is primarily a guitarist. He is also renowned as a record producer and composer.

In 1973 he was a member of the band Mouse, who released a progressive rock album entitled Lady Killer for the Sovereign record label.

His TV compositions have included A Touch of Frost, Bergerac, Plain Jane, A Bit of a Do, The Inspector Alleyn Mysteries, Dangerfield and Grafters, as well as many other British and American television programmes.