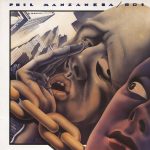 Listen Now is the second album and debut studio album by 801, whose live debut was released in November 1976. For this release, the group was officially billed as “Phil Manzanera/801“.

In 1977, hoping to capitalise on the success of 801 Live, a revised version of 801 (now known as Phil Manzanera/801) recorded and released a studio album with additional collaborating musicians including Kevin Godley, Lol Creme, and Tim Finn of Split Enz. Only Phil Manzanera and Bill MacCormick remain important members of the band, while Francis Monkman, Simon Phillips and Eno are treated as sidekicks. Lloyd Watson left the project altogether. Vocal duties were shared by Simon Ainley and MacCormick.

The album was first rereleased on CD by EG Records without bonus tracks and in 2000 by Virgin with three tracks previously unavailable. The “Flight 19” b-side “Car Rhumba” was rereleased on the CD version of Phil Manzanera’s Diamond Head as “Carhumba”. One track, “Rude Awakening”, was a leftover from the original session, while the remaining two tracks (“Blue Gray Uniform” and “Remote Control”) are demos recorded at PLS studios. “Remote Control” was re-recorded and ended up on Manzanera’s 1978 album K-Scope.