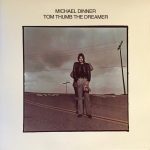 Tom Thumb The Dreamer is the second album by Michael Dinner, released in 1976 on Fantasy Records.

Michael Dinner (born May 20, 1953) is an American director, producer, and screenwriter for television. Prior to his TV career, he was a recording artist for Fantasy Records, where he released 2 albums: The Great Pretender (1974), and Tom Thumb the Dreamer (1976), along with 4 singles.