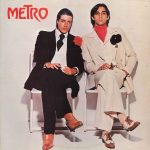 The selftitled Metroalbum was their debut album, releases in 1976

Peter Godwin is a new wave musician who was part of the band Metro, as well as a solo artist and songwriter.
His work includes “Criminal World” which was covered by David Bowie and 1982’s “Images of Heaven” which was a “cult favorite on new wave radio stations”. The dance remix of his song “Baby’s in the Mountains” was a big dance hit and described as “intricate but direct”. Godwin’s 1983 solo studio album, Correspondence was issued by Polydor Records.

Duncan John Browne(25 March 1947 — 28 May 1993) was an English singer-songwriter.
In the 1970s, Browne formed band Metro with Peter Godwin and released some records in the US on the Sire label. He released two solo albums: The Wild Places and Streets of Fire. The song “The Wild Places” was a hit single in the Netherlands. From the same period, Browne’s co-composed song “Criminal World” was recorded by David Bowie on his 1983 Let’s Dance album.