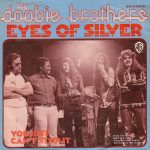 “Eyes of Silver” is the second single by The Doobie Brothers taken from their album What Were Once Vices Are Now Habits, released in 1974. It peaked at #52 in the US Billboard charts.

What Were Once Vices Are Now Habits is the fourth studio album by American rock band The Doobie Brothers. The album was released on February 1, 1974, by Warner Bros. Records. om Johnston’s “Another Park, Another Sunday” was chosen to be the album’s first single. “It’s about losing a girl,” stated Johnston. “I wrote the […]