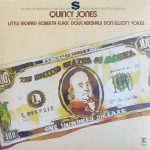 Dollars is the soundtrack album to the 1971 movie of the same name, also known as $, Dollar$, $ (Dollars) or The Heist (in the UK), written and directed by Richard Brooks and starring Warren Beatty and Goldie Hawn. The soundtrack, originally issued on Reprise Records, is composed and produced by Quincy Jones, and features performances by Little Richard, Roberta Flack and Doug Kershaw. Throughout the album, the Don Elliott Voices provide harmony vocal background to otherwise instrumental pieces.

Jones, who was at the time under contract to A&M Records, was given permission by A&M Records to become involved with the soundtrack. Little Richard, Roberta Flack and Doug Kershaw were all artists with the Warner Bros. Records/Reprise group.

The film was released in December 1971, followed by the early 1972 release of the soundtrack album. Jones’ “Money Runner”, was the promoted single from the album, released concurrently with the film, in December 1971. “Money Is”, written by Jones and sung by Little Richard, was the B-side. The album was released by Warner Bros. Records on CD in 2001 and then re-released on CD in 2008, coinciding with the DVD release of the film