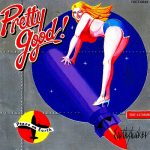 Pretty Good! is an album by the band Earthshaker, released in 1990. The album was produced by Mike Porcaro.

Earthshaker is a Japanese heavy metal band that was formed in 1978 in Osaka. One of the first Japanese metal bands, they steered toward a poppier sound on later albums and dropped from worldwide view, preferring to record and tour in their home country. After a successful run, they broke up in 1994, but returned five years later and are still going strong today.