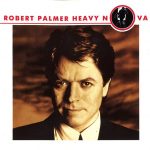 Heavy Nova is the ninth solo studio album by Robert Palmer, released in 1988. His first album for EMI Records after a 15-year association with Island Records (both with Vinegar Joe and as a solo artist), it followed Palmer’s very popular album Riptide.

Heavy Nova continued Palmer’s popularity with the single “Simply Irresistible”, which spent three weeks at No. 1 on the Billboard Mainstream Rock Tracks chart in the US. The name Heavy Nova derives from Palmer’s love of both heavy metal and bossa nova rhythms.

The album peaked at No. 13 in the US, No. 17 in the UK and No. 15 in The Netherlands. The album was certified US Platinum by RIAA in November 1988 and UK Gold by BPI in November 1988. It remains Palmer’s second most successful album worldwide, behind his 1985 album Riptide.