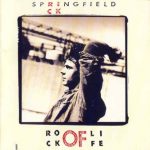 Rock Of Life is the tenth studio album by Australian singer-songwriter Rick Springfield, issued by RCA Records in 1988. The record peaked at a modest #55 on the Billboard album chart, selling approximately 350,000 copies in United States. It was the least successful of Springfield’s RCA album releases.

The title-track, however, was a successful single, reaching #22 on the Billboard Hot 100. A second single, “Honeymoon in Beirut” was Springfield’s only single not to chart in Billboard’s Hot 100 during his eight years on the label.

This album was Springfield’s last album of new material for RCA Records. Although not a commercial success, “Rock of Life” did garner some positive reviews from critics. People reviewer Ralph Novak pointed out that “even [Springfield’s] standard romantic tunes get away from romantic cliches.”

Shortly after the release of this album, Springfield took a break from his music career in order to spend more time with his wife and children, as well as focus on his acting career. He would not release another album for 11 years.

4 One Reason (To Believe)