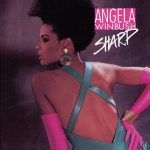 Sharp is the debut studio album by American recording artist Angela Winbush, after she left the duo Rene & Angela. The album was released in 1987 on Mercury Records and peaked at #7 on the Billboard R&B Albums chart and at #81 on the Billboard 200.

The album spawned four singles which were all commercially successful on the US R&B singles chart, including the album’s lead single “Angel” which peaked at #1 on Billboard’s Hot R&B Songs.

4 Imagination Of The Heart

8 You Had A Good Girl