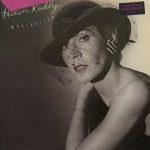 Imagination is the fourteenth studio album by Australian-American pop singer Helen Reddy that was released in 1983 by MCA Records. As with the first of the two, 1981’s Play Me Out, it did not reach Billboard magazine’s Top LP’s & Tapes chart. Reddy was subsequently dropped from the record label after the release; in her 2006 autobiography, The Woman I Am: A Memoir, Reddy wrote, “I was not surprised when I received a form letter from [MCA]’s legal department telling me that I’d been dropped from the label.”

3 A Winner in Your Eyes

8 Guess You Had to Be There