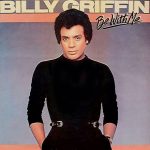 Be With Me is the debut album by Billy Griffin, released in 1982.

William L. Griffin (born August 15, 1950) is an American singer and songwriter. He is best known for replacing Smokey Robinson as lead singer of The Miracles in 1972.