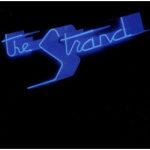 The Strand self titled album was released in 1980 and produced by Jeffrey Porcaro, who also played the drums on the track Can’t Look Back (uncredited). The Strand later did some opening acts for Toto (Hydra Tour).

Seems like yesterday, we were at Sunset Sound in Studio B working on basic tracks for The Strand album and Toto was in Studio A mixing Hydra and doing overdubs. When we were on breaks we would go over and hang and check out their mixes. Damn they sounded so great on those big speakers in Studio A. Jeff was usually in Studio B producing us, but one day he had to run over to studio A for about 10 minutes and when he got back we were just finishing cutting a track. (Just a Little More Time) He said he loved it and wanted to add some timbales. So we took a break and had fun watching him overdub timbales. Then he called Lenny Castro and had him add some more percussion. I sure miss my brother Jeff…..Rest in peace Jeff and Mike….