1978 The Alpha Band – The Statue Makers Of Hollywood 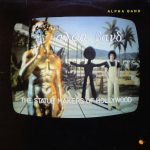 The Statue Makers of Hollywood is the third and final album by The Alpha Band. It was released in 1978.

The Alpha Band reputedly signed a huge-money deal with Arista Records, Clive Davis’s label. But their three albums were remarkably obscure, even upon release: almost straight to the cut out bin. Somehow, the Alphas never gained traction. The group is now recalled mostly as a launching pad for Mansfield, and even more for launching Burnett. Soles went behind the scenes and retired as an artist while writing and producing for films and television. When the band disbanded in 1979, all three members began producing albums for other artists.