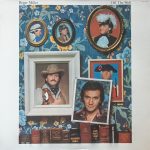 Off The Wall is an album by singer/songwriter Roger Miller, released in 1978.

Roger Dean Miller, Sr. (January 2, 1936 – October 25, 1992) was an American singer, songwriter, musician and actor, best known for his honky-tonk-influenced novelty songs. His most recognized tunes included the chart-topping country/pop hits “King of the Road”, “Dang Me” and “England Swings”, all from the mid-1960s Nashville sound era.