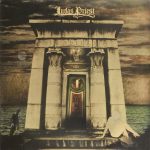 Sin After Sin is the third studio album by English heavy metal group Judas Priest, released in 1977. It was remastered in 2001 with two bonus tracks added.

The album represented several major milestones in the group’s career; the band made their major label debut and were able to work with a famous musical artist as their producer, former Deep Purple member Roger Glover. The band also fully embraced an aggressive metal sound with this release, significantly toning down the arena rock and blues rock influences shown in their past work, and the group achieved widespread popularity on the radio stations for their first time, oddly enough with their hard-edged version of Joan Baez’s song “Diamonds & Rust”.

Rehearsals took place at Pinewood Studios in London and recording in January 1977 at The Who’s Rampart Studios in the Battersea district. Deep Purple bassist Roger Glover produced it and Mark Dodson was engineer.

Judas Priest began recording themselves, but the label wanted a professional producer and had the sessions restarted. The band agreed to Deep Purple bassist Roger Glover, but after one session the band informed Glover they would rather produce themselves.  After a few weeks of unsatisfactory recordings the band recalled Glover and began the sessions over, with only six allotted days remaining. By this point the band had replaced drummer Alan Moore with Simon Phillips.

The album includes a cover of Joan Baez’s “Diamonds & Rust”, a decision which was encouraged by producer Roger Glover in the interest of adding a more commercial track. It was the first song by Judas Priest to get any radio play, and Baez herself reportedly enjoyed the cover. This was the band’s second attempt to cover the track, and the earlier version from the Gull Records era was only released later on compilations and as a bonus track on reissues of Rocka Rolla.