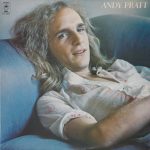 Andy Pratt is the second studio album by American singer-songwriter Andy Pratt, released in 1973 by Columbia Records. It was Pratt’s first album of entirely new music since his debut Records Are Like Life in 1969.

On release, Pratt received a positive critical reception, but had only modest commercial success. The only single issued from Andy Pratt: “Avenging Annie” was also a moderate success, peaking at number 78 in the US.