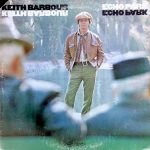 Echo Park is the only album by Keith Barbour, released in 1969 on Epic.

Keith Barbour (born January 21, 1941 in New York City) is an American singer-songwriter. He was a member of the Jabberwocks, Brown University’s oldest male a cappella group, while in college. He was a member of The New Christy Minstrels before signing to Epic Records as a solo artist in 1969. He released an album, Echo Park, in 1969, which hit #163 on the Billboard 200, and the title track, written by Buzz Clifford, hit #40 on the Pop Singles chart. He had a follow-up single, “My God and I” in November 1970. Barbour was married to TV soap actress Deidre Hall from 1971 to 1978.