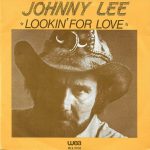 “Lookin’ for Love” is a song written by Wanda Mallette, Bob Morrison and Patti Ryan, and recorded by American country music singer Johnny Lee. It was released in June 1980 as part of the soundtrack to the film Urban Cowboy, released that year. Marcy Levy was one of the female singers who provided backing vocals on the track. “Lookin’ for Love” was reissued as the lead song on his October 1980 album of the same name.