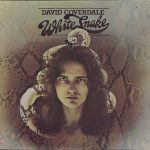 White Snake is the first solo album by David Coverdale, released in 1977. Coverdale would use the album title as the name of his future band, first known as “David Coverdale’s Whitesnake” and soon afterwards shortened to just Whitesnake. This album is often incorrectly called Whitesnake, and should not be confused with the 1987 album of similar name.

As his first solo effort, Coverdale later admitted: “It’s very difficult to think back and talk sensible about the first album. White Snake had been a very inward looking, reflective and low-key affair in many ways, written and recorded as it was in the aftermath of the collapse of Deep Purple.”