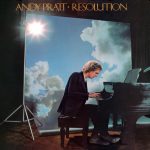 Resolution is the third studio album by American singer-songwriter Andy Pratt, released in 1976 by Nemperor, and distributed by Atlantic. It was Pratt’s first album of entirely new music since his second Andy Pratt in 1973. The album was produced by Bee Gees producer Arif Mardin, who was recruited for a more commercial approach.

2 If You Could See Yourself (Through My Eyes)

6 Everything Falls Into Place (Lillian’s Song)

8 Some Things Go on Forever