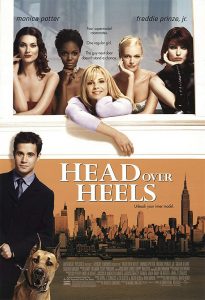 Early in the film, she moves in with four supermodels and falls for a man living in an apartment that they can see across the street. After the models try to help Amanda get the man, they find out he might not be what he appears to be.

Amanda Pierce (Monica Potter), a New York paintings conservator working at The Met, has very bad judgment in men, which is proven when she walks in on her boyfriend cheating on her with a supermodel. Amanda begins looking for a new apartment and finds one with four struggling models, Jade (Shalom Harlow), Roxana (Ivana Miličević), Candi (Sarah O’Hare), and Holly (Tomiko Fraser).

When Amanda discovers that Jim Winston (Freddie Prinze Jr.), the guy she likes, lives in the apartment across from hers, she starts spying on him to try to find his flaw. One night Amanda sees Jim kill a woman, Megan O’Brien (Tanja Reichert), and by the time the police arrive they don’t believe Amanda because she is the only witness, and the evidence is gone.

The soundtrack was composed by Randy Edelman and Steve Porcaro.