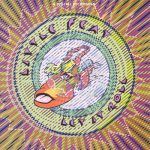 Let It Roll is the eighth studio album by the American rock band Little Feat, released in 1988. Eight of the ten songs on the album were co-written by new band member Craig Fuller, the founding member of Pure Prairie League. Fuller also takes most lead vocals. The album attained RIAA certified gold status on February 14, 1989. It is the first Little Feat studio album without Lowell George, after his death in 1979 and is one of their most successful albums, sparking a comeback by the band. The first single, “Hate to Lose Your Lovin'”, earned the band their first #1 hit on the Mainstream Rock Tracks chart.