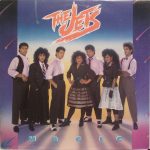 Magic is the third album by The Jets, released by MCA Records on September 27, 1987. It is also the first album without Eugene Wolfgramm, who left the group to form Boys Club.

The album included their first US dance chart number 1 hit “Sendin’ All My Love”, as well as “Make It Real”, which stayed at the top of the adult contemporary chart for 4 weeks and cracked the top five on the US pop chart, peaking at number 4. “Rocket 2 U” was also another big hit from the album, reaching number 6 on the Hot 100.

The album reached number 35 in the U.S. and was certified Platinum.

The Jets are a Polynesian-American family band from Minneapolis, Minnesota, composed of brothers and sisters LeRoy, Eddie, Eugene, Haini, Rudy, Kathi, Elizabeth, and Moana Wolfgramm. who perform pop, R&B, and dance music. They started performing as a family band in 1977. The Jets were discovered by Don Powell, who previously managed Stevie Wonder and David Bowie, among other artists.

3 Believe It Or Not, It’s Magic

6 Sendin’ All My Love

8 When You’re Young And In Love