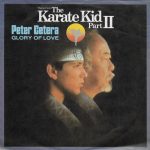 “Glory of Love” is a 1986 song by Peter Cetera written and composed by Cetera, David Foster, and Cetera’s then-wife Diane Nini, and recorded by Cetera shortly after he left the band Chicago to pursue a solo career. Featured in the 1986 film The Karate Kid Part II, it was Cetera’s first hit single after he left the band, reaching number one on the Billboard Hot 100, and it was included on his 1986 album, Solitude/Solitaire, which Michael Omartian produced.

“Glory of Love” peaked at number one on the U.S. Billboard Hot 100 chart on August 2, 1986, remaining in that spot for two weeks. It also spent five weeks atop the U.S. adult contemporary chart. Billboard ranked the power ballad as number fourteen on the Top Pop Singles of 1986, and number four on the Top Adult Contemporary Singles of 1986. The song achieved similar success in the UK, peaking at number three on the UK Singles Chart, where it was the 26th best-selling single of 1986.