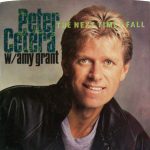 “The Next Time I Fall” is a song written by Bobby Caldwell and Paul Gordon and recorded as a duet by Peter Cetera and Amy Grant for his 1986 album Solitude/Solitaire. It reached number one on Billboard magazine’s Hot 100 and Adult Contemporary chart and was nominated for a Grammy Award for Best Pop Performance by a Duo or Group with Vocals.