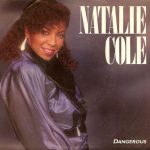 Dangerous is a a single by Natalie Cole from her album Dangerous, released in 1985. The single peaked at #57 in the US Billboard Charts.