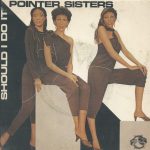 “Should I Do It” is the title of a song composed by Layng Martine Jr. which in 1981 was a minor C&W hit for Tanya Tucker, becoming a Top 40 hit in 1982 for the Pointer Sisters.

“Should I Do It” was recorded in the first months of 1981 by both Tanya Tucker and the Pointer Sisters for their respective mid-year album releases: Tucker’s Should I Do It and the Pointers’ Black & White. Although written by veteran C&W composer Layng Martine Jr. – who’d recall “Should I Do It” as an example of how “sometimes…a song just appears in my brain and kind of writes itself fast” – even as recorded by C&W superstar songstress Tucker “Should I Do It” was not considered a standard C&W number: Cashbox magazine described Tucker’s version as a blend of “the girl group classic “(Please) Mr. Postman”, with a honky tonk piano and a brief doo wop bit”. As recorded by the Pointer Sisters the song was a more overt homage to the girl-group hit sound of the early 1960s. A chart disappointment for Tucker in the summer of 1981 – stalling at #50 C&W – ,”Should I Do It” as recorded by the Pointers would reach the Top 20 of the Billboard Hot 100 in early 1982 although it would not rank among the group’s very biggest hits being a Top Ten shortfall.

Black & White is the eighth studio album by the Pointer Sisters, released in 1981 on the Planet label. Black & White was their fourth record with producer Richard Perry and yielded the #2 pop hit “Slow Hand”. The fourth single release, “Should I Do It”, reached #13 in the spring of 1982, making Black […]