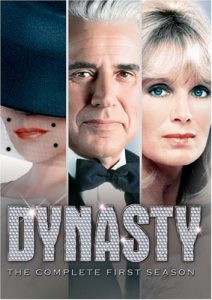 Dynasty is an American prime time television soap opera that aired on ABC from January 12, 1981, to May 11, 1989. The series, created by Richard and Esther Shapiro and produced by Aaron Spelling, revolves around the Carringtons, a wealthy family residing in Denver, Colorado. Dynasty stars John Forsythe as oil magnate Blake Carrington, Linda Evans as his new wife Krystle, and later Joan Collins as his former wife Alexis.

Dynasty was conceived by ABC to compete with CBS’s prime time series Dallas. Ratings for the show’s first season were unimpressive, but a revamp for the second season that included the arrival of Collins as scheming Alexis saw ratings enter the top 20. By the fall of 1982, it was a top 10 show, and by the spring of 1985, it was the #1 show in the United States. The series declined considerably in popularity during its final two seasons, and it was ultimately cancelled in the spring of 1989 after nine seasons and 220 episodes. A two-part miniseries, Dynasty: The Reunion, aired in October 1991. A reboot series with a new cast premiered on The CW in October 2017.